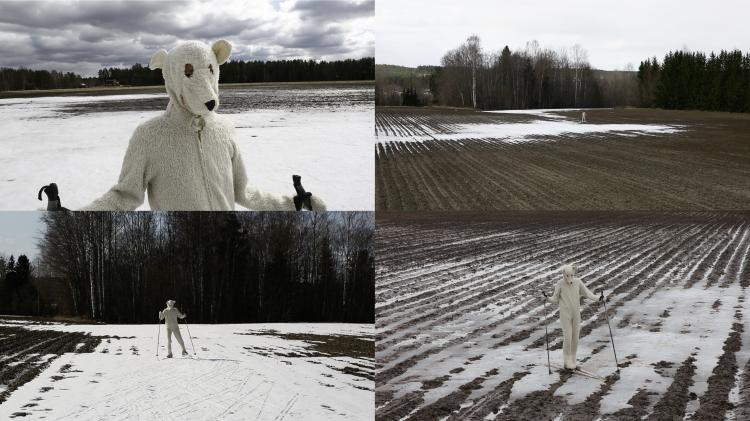 A lone cross-country skier dressed in a polar bear costume is making her rounds on a rapidly shrinking snow patch in a rural landscape in the north of Sweden.

The soundtrack is a modified Karaoke version of the song Eisbär, Polar Bear, by Swiss new-wavers Grauzone (1980). When Grauzone sang, I would like to be a polar bear in the cold arctic, and, polar bears never have to cry, the modified text now says, I don’t want to be a polar bear in the warming arctic, and, polar bears soon must weep. The cliché image of the starving polar bear on a melting iceberg is the most ubiquitous one that people associate with rampant global warming and climate change. This short, performative music video delivers an ironic, yet critical comment not only on the pressing topic itself, but also on how the complexity of the science gets reduced to mere clichés. It’s meant as a light and funny appeal to consider and act upon the most pressing issue of our time, to help avoiding what happens to the skier: the complete loss of her “habitat”.