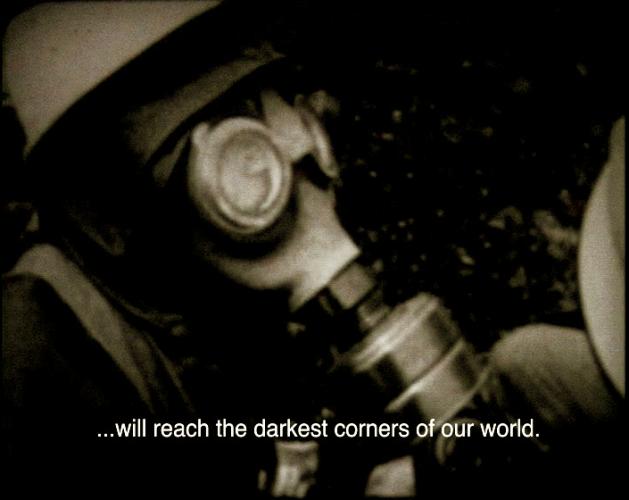 In 1998,  I shoot a film in Hungary in a former civil protection/disaster prevention camp of the Hungarian military. In mist the ruins (the camp was built as if it was destroyed by an atomic bomb) I found a storage room with some TV and editing equipment, and shelves with dozens of 16 mm film rolls. I asked permission to borrow some rolls and review them, but the camp’s guardian denied permission. So I decided to smuggle at least one roll out. This can contained the  16mm film JELENÉS*, an dramatic and apocalyptic rendering of one of the exercises they performed during the cold war in anticipation of the nuclear holocaust of World War III.

Unsure what to do with this Tarkowsky-influenced masterpiece, I let it sit on my shelf for 6 years, until George W.Bush held the inaugural address for his 2nd term on Jan 20, 2005. This speech was highly ideological,  indeed it contained the neo-conservative manifesto –reminiscent of a cold war rhetoric.

In JELENÉS, the monotonous deep-voiced narration in Hungaria is incomprehensible to most – it contains a very technical account of the apocalyptic consequences of a nuclear strike.

I decided to subtitle this voiceover with the text of Bush’s speech (slightly shortened for this purpose). The image and sound of the original film form a new symbiosis with the text, one that reveals the subtext in Bush’s words: the desire of American hegemony and world domination and the mission of bringing freedom even to “the darkest corners of this world”.

In the thinking of the Bush administration, the cold war connects to the war on terror, the empire of evil (formerly the Soviet Union) shifts to the Islamic world, a black and white philosophy that prematurely trumpets the victory of capitalism and the triumph of western freedom.

In JELENÉS, the protagonists go home happily after the exercise: it had been just a simulation. When we already think the film is over, the sound changes to a single heartbeat and a barking dog, and finally, the epilogue: atomic explosion upon atomic explosion.

(*The title of the video changed from Jelenés, the original film title, to Helenés because of my reading mistake. Jelenés translates as "Apparition" in Hungarian)